Direct help to victims, witnesses and survivors of crime (1991 – 2013)
Bílý Kruh Bezpečí has been providing complex victimologic intervention for victims and witnesses of crime through its 12 offices in 9 regions of the Czech Republic. This service is professional, free of charge and discreet. Personal contact is always provided by a pair of advisors; a lawyer and a psychologist. There are 322 lawyers and psychologists who work for the Bílý Kruh Bezpečí on voluntary work basis.
The victim support service combines standard professional counselling, specialized services (psychotherapy, accompaniment to process acts, preparation for court hearing, financial relief, weekend-long psychological reconditioning events, physiotherapy) and nonstandard situations (driving out to hospital visiting injured victims, visiting the place of residence of survivors, cross-border assistance).

Training and educational activities
Bílý Kruh Bezpečí is an accredited training centre (accredited by the Ministry of Labour and Social Affairs of the Czech Republic, registered at the Ministry of the Interior of the Czech Republic –department of education) aimed at improving the practice of justice administration. The target groups are: police officers, judges, prosecutors, certified experts, lawyers, social workers, medical officers and university students.
Lecturers from the Bílý Kruh Bezpečí hold regular lectures at the Judicial Academy in Prague and Kroměříž, the Police Academy in Prague, the Faculty of Humanities at Faculty of Arts, Charles University. Bílý Kruh Bezpečí offers a wide set of trainings and lectures, provides regular training for police teachers, methodologists and lecturers.
The topics of lectures and trainings often include: the Rights of the injured party during criminal proceedings, Compensation for damage and state financial relief, the Impact of crime on a victim, Prevention of secondary victimization, the Domestic Violence Protection Act, Helping people threatened by domestic violence.

Publishing and public education activities
Bílý Kruh Bezpečí has a 20 year history of publishing its own periodical, BKB Newsletter (a quarterly, 38 pages, distributed in the main network of libraries, news media and both chambers of the Czech Parliament). Its editorial work has widely covered victim and witnesses’ issues; Bílý Kruh Bezpečí publishes mainly leaflets and brochures, but also posters and stickers (Court Witness, Compensation for Damages, Rape Victims Help, The Rights of the Damaged Party, Crime Victim Trauma etc.). 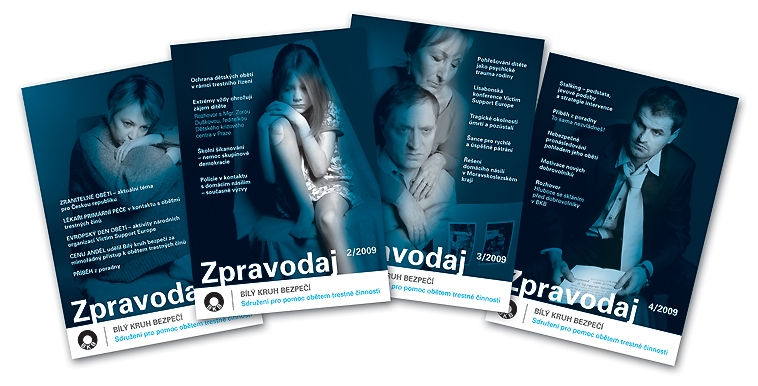 A publication by the Bílý Kruh Bezpečí authors titled “Providing Support for Victims (and Witnesses) of Crime” came out in 2007 at Grada publishing house, preceded by a book titled “Helping Victims of Crime over 15 years - Bílý Kruh Bezpečí”, released in 2006. The editors from Bílý Kruh Bezpečí also greatly contributed to the publication “Victims and Journalists” issued by the Ministry of the Interior.

Bílý Kruh Bezpečí carried out several important campaigns, Czech Republic wide campaign in 2001 was focused on the existence of domestic violence; a campaign supporting the passage of Act No. 135/2006 Coll. in 2007 and the concept of banishment; a campaign focused on latent criminality victims named “Solve your Problems While There is Time and under the Law” at the end of 2009. 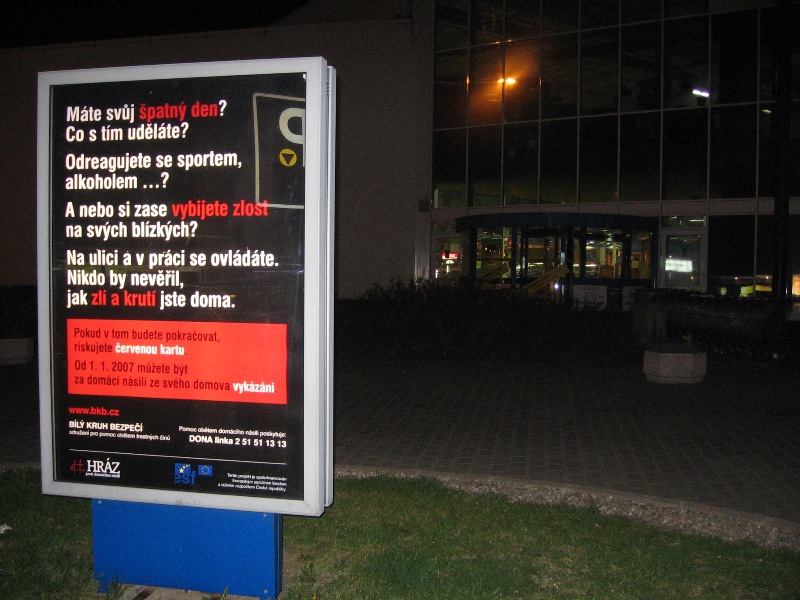 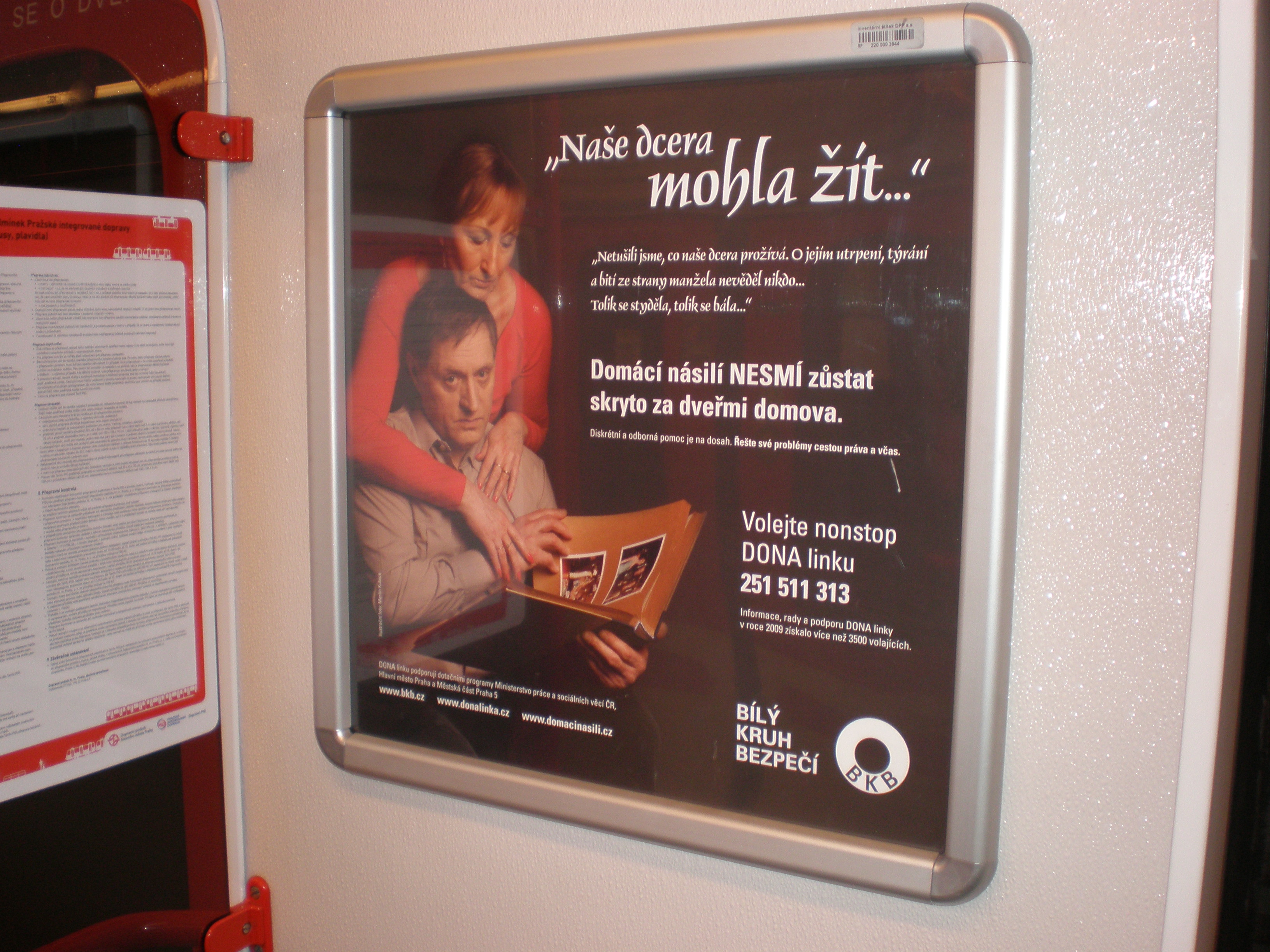 Bílý Kruh Bezpečí has submitted a number of suggestions to legislative initiatives (e.g. the amendment of criminal law Article § 241 and § 215a; amendment of law of criminal procedure § 44a. In 2004 Bílý Kruh Bezpečí drew up a draft of Act no. 135/2006 Coll., which was submitted by way of the Parliament member’s initiative and has taken significant part in the preparation of Act no. 209/1997 Coll., Act on Financial Relief for Victims of Crime.
Bílý Kruh Bezpečí also proposed and enforced the implementation of separate waiting rooms for witnesses for the prosecution at the court houses in the Czech Republic as part of organizational measures.
As part of its expert activity, Bílý Kruh Bezpečí also acquired the SARA DN diagnostics method (Spousal Assault Risk Assessment) and has adjusted it under the approval of the licence holders from Canada and Sweden for use in the Czech Republic. Bílý Kruh Bezpečí has passed on this method for utilization by the Police Force of the Czech Republic.
Since 1996 Bílý Kruh Bezpečí has been a fully-fledged member of the transnational Victim Support Europe organization (formerly The European Forum for Victim Services), has actively cooperated in the setting up of projects, standards, research, implementation control and documents for the EU R Framework decisions in the field of crime victims support in the EU.
In 2008 Bílý Kruh Bezpečí has taken active part in the European conference held within the Czech Republic’s EU Presidency, which took place in Prague and was focused on helping vulnerable crime victims in the EU.

Project work
Bílý Kruh Bezpečí has realized a number of its own projects and has successfully taken part in many international projects.

1998 – Till this time
Joint project with the Filip Venclík’s endowment fund, which has enabled to provide immediate assistance to the victims and survivors in the total value of one million CZK;

2001
Project named “Comparison of legal norms and procedures of socially legal nature and system approach to the solution of domestic violence in selected European countries (UK, The Netherlands, Finland)“, a publication was released – endorsed by the Open Society Fund;

2005 - 2007
Own extensive project backed by European social funds resources – “Hráz” (Barrier) project (see the Final report attached). Among other things, a lectorship fund for domestic violence incidents solution was created within this project, which has been utilized to this day Czech Republic wide, manuals were published, SARA DN method was adopted;

2006 - 2008
Bily kruh bezpeci was the partner in the international MUSAS II project which aimed to assist members of the European Forum for Victim Services to develop policies, procedures and training on young victims of crime. The project, co-financed by the European Commission under Leonardo da Vinci Programme, was realised in the Czech republic, Finland, Slovakia and Sweden.

Project INFOVICTIMS - the general objective of Project Infovictims is to contribute to the increase of information given to the victims of crime concerning the criminal justice system, their rights and the ways to exercise them. This will be possible trough the design and production of informative materials to disseminate to the victims of crime; but also trough  raising the awareness  of the judicial and police authorities to the duty to inform, ensuring that the victim fully understands their rights and that their needs, interests and expectations are taken into account. The project is promoted by APAV (Portugal), BKB is one of the project's partners next to Victim Support Europe, Weisser Ring Austria and Brottsoffermyndigheten from Sweden.

Project "KRUH bezpečí zvlášť zranitelným obětem trestných činů" - funded by the ESF and the state budget of the Czech Republic. The project aims to improve the quality and availability of social services for particularly vulnerable victims of crime, including victims and survivors. These people find themselves in a serious life crisis and they are threatened by social exclusion, including the loss of the ability to remain in the labor market. The project implementation will focus on support of vulnerable victims through nine key social workers with activities covering the whole country. They will be trained and ready to provide human support and assistance in the implementation of the legitimate interests of vulnerable victims and their rights, taking care of personal matters and others. Quickly accessible expert assistance will contribute to the stabilization of those affected by crime, compensation for the lost or temporarily limited powers, starts its viability and reduce the risk of developing posttrauma. Immediate assistance will continue in the framework of enhanced therapeutic program and basic services of BKB - via social counseling network of BKB.

Helpline for victims of (domestic) violence - the project funded by Norway grants and Open Society Fund Prague.
The project aims to build a special toll-free telephone crisis helpline 116 006  corresponding to the current technical and capacity needs. Starting in January 1, 2015 the helpline will provide immediate support to victims of domestic violence and to women / men affected by violence. The target groups will be monitored separately. The helpline will follow the 13 years long experience of DONA helpline.